Who Is St. Ivan 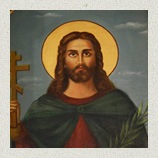 One of the Jews, thinking that these were Christians coming to take up the remains of the martyr, grabbed a bow and tried to shoot an arrow at them, but he was restrained by the invisible power of God, and became rigid.

In the morning the vision vanished, but the archer continued to stand motionless. Having told the gathering inhabitants of the city about the vision and what was done to him by the command of God, he was freed from his invisible bonds. Having learned about the occurrence, the ruler gave permission to bury the body of the martyr in the local church. St. John was martyred sometime between the years 1330 and 1340.

The captain who had betrayed St. John repented of his deed, and decided secretly to convey the relics to his own country, but the saint appeared in a dream to the priest of the church, and prevented this. After seventy years the relics were transferred to Suceava, the capital of the Moldo-Valachian principality, and placed in the cathedral church.

Another detail from the life of St. John the New: “The angels of the Lord do not want to be worshipped. When an angel showed St. John the new Paradise in Heaven with all its marvels, St. John fell at the feet of the angel to worship him. But the angel did not allow that, saying: Do it not, for I am thy fellow servant, and of thy brethren the prophets, and of them which keep the sayings of this book: worship God (Rev. 22:8-9). Yea, we worship God alone.”

On the appearance of St. John after his martyrdom and his Holy Relics: “An Orthodox priest in the city saw the New Martyr in a dream. John asked him to bring his body to the Church. There the Holy Relics remained for many years until the Ruler (Voievod) of Moldova Alexander the Good (Alexandru cel Bun) at the request of Metropolitan Joseph brought them to his capital city of Suceava on the Feast of the Nativity of St. John the Forerunner, June 24 (July 7), 1402. We may note the coincidence of the names and the martyr’s heroism of both these great followers of Christ.

In 1685 the Relics of St. John were taken by the Polish King Jan Sobieski to Stryy in Ukraine. They were later transferred to the Basilian Monastery in Zhovkva, also in Halychyna. The Austrian Emperor Joseph II returned them to Suceava in 1783. The Monastery that bears his name was the site of huge pilgrimages on the day of commemorating his martyrdom. Many people came from Bukovyna.

There are Orthodox parishes in Canada founded by Bukovynians which bear his name. Among them is the Parish of St. John Suchavsky in Lachine, PQ, which is currently in the jurisdiction of the Russian Orthodox Church Outside of Russia.  There is also the parish of St. John of Suchava in Andrew, Alberta.  There is also our Cathedral of St. Ivan Suchavsky in Winnipeg, which has, since its founding, always been in the jurisdiction of the Patriarchate of Constantinople in North America. Since 1995 it has been one of the distinguished parishes of the Ukrainian Orthodox Church of Canada which established communion with the Patriarchate in 1990. The Ladies Society of the Parish has as its patron the renowned Ukrainian writer from Bukovyna, Ol’ha Kobylians’ka, who participated in the pilgrimages to Suceava.

It was the martyrdom of St. John rather than his eloquence or his status as merchant that kept him alive in the memory of his brothers and sisters in the Church. This was no tragedy but a heroic and victorious event in which John of Trebizond and later Suceava offered his life as an example of faithfulness and love to the One Who offered His life for all.

Through the prayers of the Holy Great-martyr St. John the New of Suceava, Lord Jesus Christ, have mercy on us.

You have filled your life with good deeds, charitable acts and sincere prayer, O martyr; and you worthily prepared yourself for suffering.  You put to shame the wickedness of sinners; you were appointed as a mighty force of the church, and the praise of Christians, O Ivan of eternal memory.

KONDAK OF TEMPLE ST. IVAN IN TONE-2. Appearing as a bright star, you announced the Sun-Christ with your rays, O Martyr Ivan.  You extinguished the fires of falsehood, and gave us the Divine Light by unceasingly beseeching God for us.